Review of Lifetime by Liza Marklund 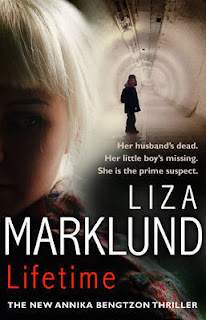 Annika Bengtzon – journalist, wife, mother, investigator and self-doubter– a remarkable combination in any woman, but Annika is not just any woman. When her husband Thomas walks out on her minutes before her home burns down, her best friend turns her away and she has to find herself and the children Ellen and Kalle somewhere to live immediately with only the clothes they stand up in, she still has the strength to pursue the case of Julia, a policewoman accused of the murder of her hero police husband David Lindholm and toddler son Alexander. Julia was in the flat when David was shot with her service pistol. Alexander has disappeared. She MUST be guilty – will anyone believe otherwise? Who else would wish to kill Stockholm`s number one hostage negotiator and solver of difficult crimes? Especially as she appears to be mentally unstable due to problems within her marriage.


During the course of her reporting on the murders, Annika discovers that all is not as it seems and that David Lindholm was actually not the saintly and magnificent policeman portrayed in the Press and by certain of his colleagues. He is, and has been in the past, involved in some very doubtful enterprises. Not only that, he is a relentless womaniser. Trying to untangle this knot of worms is laborious. She sees a link to an evening when she spent a shift on patrol with Julia and Nina (Julia`s work partner) when they were first on the scene of a notorious axe killing. Although she receives a little help from Nina, who eventually tells her to leave it alone,she will not let go and  is attacked and warned off by thugs. Notwithstanding, Annika visits prison inmates whom David has mentored. None will say anything against him, so she has to use other methods and her incisive insight to try and prove her theories.


Interwoven with her mission are the threads of her own circumstances, the possibility that she may lose her job and that she may be putting both herself and her children in danger. We see her through her own eyes as a self-doubter and through others` eyes as being headstrong and reckless.


The tension in the book is amazing and Liza Marklund relentlessly piles on the suspense page after page. There are many twists and turns in the story which keep the reader on their toes trying to second-guess what the next move will be. And believe me, you will be drawn in from the very first paragraph. An exciting and unpredictable read.
Reviewed by Liz.

Thank you to Transworld for sending us a copy to review.
Posted by Sarah at 05:16