Review of The Killing Room by Richard Montanari 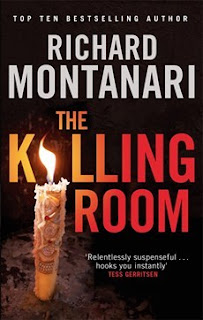 Crime inamoratos, settle in your favourite niche, have food and drink to hand, open this book and you`re away! Set in the city of Philadelphia in the grip of a severe winter, a city which once had a church on nearly every street but whose previously religious-minded population has abandoned those streets and churches to poverty and neglect, this is a book which is charged with horror, fear and electrifying emotion.


“One God, seven churches.” ” You will find the first of the dead at….”. The chilling call taken by detective Jessica Balzano at Police HQ begins the nightmare. She and her partner Kevin Byrne are on the trail of a ruthless killer who uses the basements of the city`s abandoned  Catholic  churches as killing rooms. Each murder is different: an ex-policeman wrapped in barbed wire and kept alive for 10 days: the second victim frozen in a block of ice….. The list goes on, shocking the citizens of the city. The Press, and in particular television  reporter Shane Adams, whose methods of discovering the dirt on people are, to say the least, unscrupulous, are desperate to supply their own reasons for what is going on but are as baffled as the investigators. Jessica, Kevin and eventually their whole team are involved with the case - a killer who leaves pointers: missals with each body, the differing m.o.s of the crimes: are there perhaps clues in the Bible, in particular in the Book of Revelations as to motive and means? Is there something in the perpetrators` past leading them to do this?


The reader is confronted with brilliantly conceived twists to the story – characters appear who lead us to develop, rightly or wrongly, our own possible solutions and adding further to the excruciating suspense. What kind of a person would do this and why?


Excellent read. I could not put the book down! I would highly recommend this author and look forward to reading more of his work.
Reviewed by Liz.

Thank you to Sphere for sending us a copy to review.
Posted by Sarah at 04:24