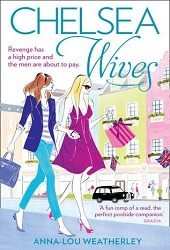 Last week I escaped the rain on a week’s holiday to Italy. I always like to plan what I am going to read when I’m away and had been keeping Chelsea Wives at the top of my list. I definitely was not disappointed. From the moment we took off I had my nose in the book and did not want to put it down.

Chelsea Wives tells the story of three glamorous ladies who lunch. There is Imogen, an ex-model and long suffering wife of Sebastian Forbes, Calgary a former fashion editor who finds herself having to turn a blind eye to her husband’s indiscretions far more than she wants to and Yasmin, Lady Belmont-Jones who is not all that she seems.

Weatherley takes the reader into a world where mind numbingly expensive shopping sprees, long leisurely lunches and glamorous photo shoots are just everyday life. However, the ladies show that they’re more than just a pretty face when they hatch a plan to get revenge on their scheming and deceitful husbands.

I loved reading Chelsea Wives, it is gripping and I was hooked from the very first page! There are some hilarious moments that will leave you laughing out loud.
I was surprised to see that this is Weatherley’s first foray into the world of adult fiction (she has previously written two novels for the teenage fiction market). This is a fantastic debut novel that I would highly recommend.

Thank you to Avon for sending me a copy to review.
Posted by Sarah at 09:52 No comments:

Review of Women and Children First by Gill Paul 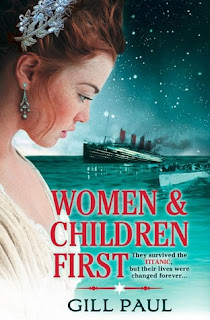 ‘Women and Children First’ is set on the Titanic and follows the lives of four very different passengers who survive the disaster. Reg, a young first class dining steward, Annie an Irish woman traveling in third class with her children, Lady Juliette Mson-Parker who is pregnant and not married and George Grayling who is travelling with his long suffering wife. We learn about these characters before and follow their lives immediately after the sinking on the 14th April 1912.

I have read a lot of books about the Titanic this year due to the centenary taking place in April. However, ‘Women and Children First’ really stands out for me. Although a fictional account, Paul has filled the novel with historical facts leaving a riveting tale to be read. The novel gives the reader facts about what life was really like on board the doomed ship, including what people ate and what they did to keep themselves busy. This, intertwined with the fictional tale of the characters creates a heart wrenching, un-putdownable book.

The chapters alternate between each of the characters allowing the reader to feel that they know each of them. There are a lot of twists and turns in the plot of each person, but I found this easy to read and did not feel overwhelmed with information. We see in great detail, the effects that being on the Titanic had on each person and how it changes their lives.

This is a mesmerizing, fascinating and thought provoking read, ‘Women and Children First’ is an outstanding debut and I am looking forward to reading more from Gill Paul. Highly recommended.
Posted by Sarah at 10:31 No comments:

Review of The Penny Bangle by Margaret James 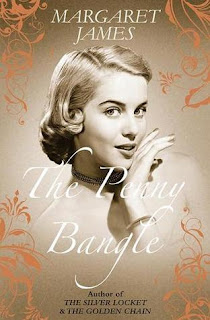 The Penny Bangle is the third book in a trilogy about the Denham family. Despite being a trilogy, each book also reads very well as a stand alone novel.

The story follows nineteen year old Cassie who leaves her terraced Birmingham street in 1942 to go to Dorset as a land girl. It is a huge change for Cassie, but in a short time she learns to love the countryside. Romance begins to blossom between Cassie and Robert Denham, but he is soon sent off to fight in North Africa. Cassie feels restless and signs up to the ATS where she is posted to Egypt.

When Robert is reported missing in action, Cassie cannot believe it. As time goes by she finds herself becoming to closer to Robert’s twin brother Stephen, but will he ever replace Robert and will Robert return?

I was looking forward to reading The Penny Bangle after having read The Silver Locket a few months ago. James’ writing is so vivid that the scenes and characters described really come to life. I also really liked Cassie as a heroine, she is very determined and strong willed. I felt that she grew a lot, as a person, as the novel progressed. The plot itself is engaging and takes the reader from rural Dorset to war torn London, Italy and Egypt. As with all Choc Lit books, both hero and heroine have a strong voice so we get to hear Robert’s side of the story too.

This is the second novel that I have read by Margaret James and I loved it. It is quite fast paced and I found that I just wanted to keep on reading. Highly recommended.

Thank you to Choc Lit for sending me a copy to review.
Posted by Sarah at 14:38 1 comment: