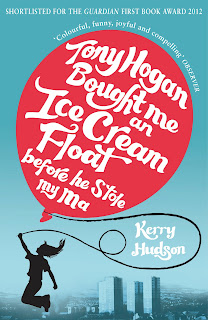 
What is it that makes us sit down regularly with a few imaginary people, often for years at a time? We give up nights out, time with loved ones, holidays are spent in a shady spot to avoid glare of the sun on the laptop screen. Make no mistake, writing a novel – not even a good one, just 80,000 words of story - is not easy. It can be hugely enjoyable, it is a privilege to be able to but it also requires a lot of courage, commitment, time and hard work to take on the challenge of something the size of a novel.

Like most writers I embarked on my first novel Tony Hogan Bought Me an Ice-Cream Before He Stole My Ma not thinking there was a hope in hell it would be published. I'd been writing short stories for about a year, placing in a few competitions and literary magazines, but I'd never attempted a novel, and everywhere I read how impossible it was to get a debut novel published. Still, I took six months off from the charity I worked for, went off to Vietnam and set out to write one.

Why? I started writing a novel because I'd always wanted to, because I was finding it so hard to stay in those short story confines, because I knew there were some people who thought I wouldn't or couldn't. I wanted to write Tony Hogan...in particular because I wanted to shine a light on the love, laughter, fight and energy in Britain's less salubrious streets with dignity and because I'd found few books that had. I wrote it because it was a way of understanding and paying due acknowledgement to my own background, so similar to Janie Ryan's, the protagonist of my novel. Those are the reasons I started writing the novel but I kept on writing because getting up each day and sitting down with the story, with those sweary, spirited Ryan women, was a pure joy.

I don't know why I choose what I choose to write about beyond the fact that I have something to communicate and that I'm curious or angry or captivated enough about something to want to explore that. Writing your first novel isn't easy, your second definitely isn't any easier either, but it feels like a kind of magic to be able to sit and create a whole world with nothing but your mind. Perhaps that's why we all put in the hard work and continue to be inspired, continue to work, continue try our best to do our imaginations justice.

You can find out more about Kerry on her website:  www.kerryhudson.co.uk

Kerry is also running a competition on twitter:
'Want to win a signed copy of Tony Hogan? I'm  trying to put together a Tony Hogan soundtrack. Simply submit your song suggestion to me @kerryswindow on Twitter with the hashtag #tonyhogantune by the end of Monday 8th of July. If your song is one of the ten selected for the soundtrack (and you were the first to suggest it!) I'll send you a signed copy of Tony Hogan.'
Posted by Sarah at 02:08