Review of The Dressmaker by Kate Alcott 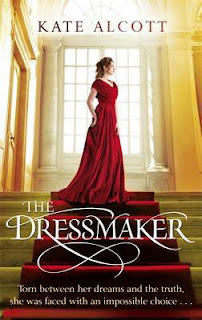 The Dressmaker is a fantastic novel set against the background of the Titanic disaster.

Tess hates her life as a maid and longs to become a seamstress. She runs away in hope of finding work on the Titanic and cannot believe her luck when she is hired by the esteemed fashion designer; Lady Lucille Duff-Gordon. However, fate intervenes and Tess finds herself a survivor of one of the infamous sinking of the Titanic. At first, she is elated to have survived, but soon she becomes embroiled in the accusations made against the Duff Gordon's and what happened in their lifeboat.

The majority of The Dressmaker focuses on the aftermath of the disaster and the hearings which took place in New York. I was fascinated by the historical aspect of this novel and feel that Alcott has cleverly interwoven fact and fiction into the storyline.

I thoroughly enjoyed this book and didn't want to put it down. It is a Titanic novel that is told from a totally different perspective. Alcott's fast paced plot had me glued to the pages and there are a number of surprises in store for the reader. Beautifully written, emotional and with romance at the heart, this is a book that I highly recommend.

The cover is stunning too!

Thank you to Sphere for sending me a copy to review.
Posted by Sarah at 13:00 No comments:

Review of The Baby Diaries by Sam Binnie 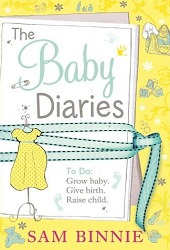 Last year, I loved reading Sam Binnie's debut novel The Wedding Diaries. So, I have been really looking forward to reading the sequel,The Baby Diaries.

Kiki and Thom have been back from their honeymoon for a few weeks when Kiki finds out that she is pregnant. What follows is diary of the run up to the birth of their first child and life once it is born. There are lots of sub plots involved too including problems at Polka Dot books where Kiki works, attending ante-natal classes, family issues and finding out that her (slightly crazy) childhood friend Annie is also expecting at the same time. I really enjoyed re-visiting some of the characters from The Wedding Diaries including Alice, Jaqui and Kiki's sister Susie.

I was really pleased to see that the novel was still in diary format from Kiki's point of view, as this was one of my favourite things about The Wedding Diaries. I found it to be a fresh approach and really made me feel as if I knew Kiki and the other characters. It is a very witty book and covers all of the trials and tribulations of pregnancy.

This is such a great, feel good book that will have you laughing out loud in places. I loved it and read it in two sittings. Although, it is a sequel it will also read well as a standalone novel.

Review of Stalkers by Paul Finch 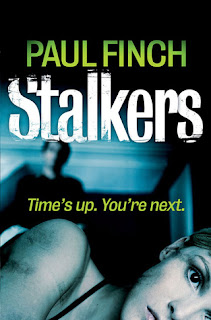 The moment Sergeant Mark “Heck” Heckenburg breaks the rules and goes it alone to investigate the disappearance of over thirty ordinary, lawabiding women, he is in trouble. He finds himself on the trail of an extremely clever group of men who can acquire anything you want, when you want it, but at a price over and above that of mere money. He reluctantly accepts the help of Lauren Wraxford, an ex-squaddie, whose skills, honed in Iraq and Afghanistan, become increasingly essential as together they track down the “Nice Guys Club”. Heck has only Lauren as backup as they race up and down the country from London to Manchester and back in pursuit of the Club members who remain stubbornly elusive but who eliminate every lead they get, however tenuous. They, in turn, are next to be eliminated but manage to escape death on more than one heart-stopping occasion. DCI Gemma Piper, Heck`s boss, knows what he is up to but cannot help him – he has cut himself off from the Force for a reason…….

This is an amazingly fast-paced book with all the elements of gruesomeness, drama and sheer terror combined. Old-world style gangsters in the persons of Bobby Ballamara and his trusty aides exist side by side with the modern type of gangsters using the most modern technology available and who are so ruthless that it takes the reader`s breath away. Who will save Heck? Will he trace the Club?

I could not put the book down until I had all the answers. An outstanding crime thriller – I cannot wait to read more about Heck`s undertakings in the name of law and order. This is one of the best reads I have ever had, and I don`t say that lightly! 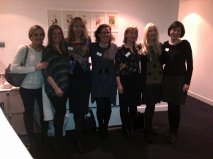 A couple of weeks ago, I was invited to the Avon offices for a blogger event. It was a fantastic evening and I got the chance to meet some of my favourite authors and chat to fellow bloggers. We also had delicious Avon cupcakes and wine.

We were also given amazing name badges, mine is pictured below. 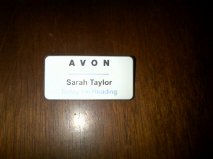 At the end of the evening, we all took a lovely goodie bag home. Here is a picture of the contents, I am so excited about the new Claudia Carroll proof that we were given. 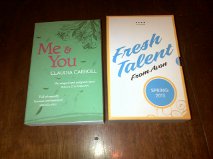 Thank you to Becke at Avon for inviting me.

Review of The Gilded Fan by Christina Courtenay 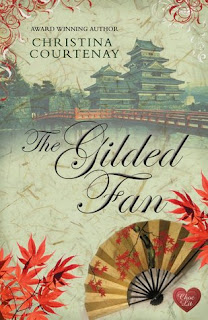 I am a huge fan of Christina Courtenay and was delighted to receive a copy of her latest book; The Gilded Fan.

Set in 1641 and opening in Japan, Midori is the orphaned daughter of a Japanese samurai and an English lady from Plymouth. When the Shogun orders all foreigners to leave Japan or be killed, Midori has no choice but to attempt the perilous journey to England and hope that she is able to find her mother's family. She manages to persuade handsome Dutch Captain Nico Noordholt to allow her to travel on his voyage from Japan to Holland. However, he is reluctant as he realises that having a beautiful woman on a ship full of sailors for months is going to cause a few problems.

Midori and Nico are fantastic characters. I was fascinated by the historical aspect of this novel, especially the Japanese history about which I knew very little. At the very heart of this book is a deep, blossoming love story that will leave you on the edge of your seat. Both Nico and Midori are attracted to one another, but both have secrets hidden away that could tear them apart forever.

This book is fast paced and full of drama, for both the hero and heroine. I really admired Midori and the way that she followed her own principles alongside embracing different cultures. This is Courtenay at her best, it is a wonderful book and kept me mesmerised from beginning to end.

Thank you to Choc Lit for sending me a copy to review.
Posted by Sarah at 10:33 3 comments:

Review of Where the Devil Can't Go by Anya Lipska 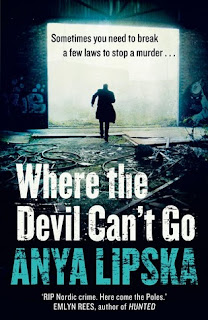 Where the Devil can`t go – send a woman! That is exactly what ambitious young female detective, Natalie Kershaw does in order to solve the mystery of the death of a Polish girl found floating in the Thames with not a shred of clothing or identity on her, only a tattoo of two names Ela and Pawel entwined in a heart near the base of her spine. Is this murder? For the Polish community in the East End of London, the suicide rate of young girls throwing themselves into the Thames is very high. Another girl is discovered dead in a hotel room after an apparent drugs overdose. Are these cases linked?

Meanwhile, the resident Polish private detective and hard man of the community Janusz Kiska has been asked by his priest, Father Pietruski, to find the whereabouts of a young waitress who has disappeared. The course of his investigations leads him to cross the path of Natalie Kershaw, who at first treats him as a murder suspect and possibly involved in a drugs ring. He, however, has stumbled across the secret of the drug dealers, and has to flee for his life. As part of his search, Janusz has to go back to Poland to dig up the past concerning the dark days of Communism – on this trip he is accompanied by his best friend Oskar , a building site worker, who has been asked to repatriate a co-worker killed at the site. During his few days in Poland Janusz, uncovers a dark and terrible secret kept by an ex-member of the SB, the Communist secret police, which has ramifications reaching across time and borders to solve at least one of Natalie Kershaw`s murder cases but not before other deaths have occurred.

I found this an absorbing read from cover to cover. Anya Lipska is a great writer, combining touches of humour with great suspense. You feel part of the Polish community and the story opens your eyes to what these characters think and how hard they work. A highly recommended read. I eagerly look forward to reading more from this author!

Thanks Liz and thank you to The Friday Project for sending us a copy to review.

Where the Devil Can't Go is available to buy now.
Posted by Sarah at 09:53 No comments: