Review of The Ripper Secret by Jack Steel 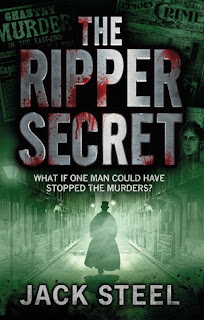 Liz has reviewed The Ripper Secret for us...

An interesting take on the perennial mystery of the murderer who wreaked havoc in London during the late 1880s, Jack Steel`s story is a delight to read. He takes us deep into the dirt, squalor and poverty of the Whitechapel and Spitalfields areas of London of the time – a place of dosshouses, brothels, and drunkenness where women have to sell themselves on the streets for 4 pence, the price of a doss-house bed for the night. If they were successful in their quest, they headed for the nearest pub more often than not and drank away their misery and their earnings, so had to start again.

It is against this background that the horrific murders take place, perpetrated by a very clever man who can remain invisible to the general population and to those who are trying to apprehend him. The police were an infant force then, lacking the organisation or the forensic expertise which we have come to take for granted in this day and age. In spite of the ineptitude and lack of organisation in the investigation, Inspector Abberline suspects the Ripper`s motive for the increasingly gruesome crimes but is hampered by his Commissioner, Charles Warren, at every turn – does Warren know more than he is letting on? Should a man in such a powerful position be doubted? Warren is an antisocial character placed in a job which he hates, vilified by the press and disliked by both the Home Secretary and those whom he commands – does he have a secret?

Jack Steel plunges us into a dark world of fear and abject hopelessness and builds the tension between the reader and his subject throughout the book – on the one hand, there is the insight of Inspector Abberline, on the other the progress of the killer and overall the one person who has knowledge. I could not put the book down! I thoroughly recommend it to readers of crime and historical novels. As no-one will ever discover who Jack the Ripper was, this is a very plausible take.

A great and very satisfying read.