Review of The Ways of the World by Robert Goddard 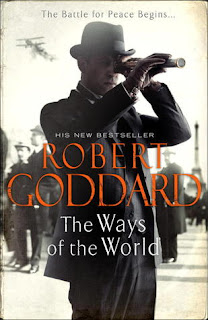 The Ways of the World is set in Paris during the peace conference after the first world war.


James ‘Max’ Maxted, war hero and second son of Sir Henry Maxted, is devastated to hear of his father’s death in Paris. Alongside his elder brother Sir Ashley, Max travels to France and is shocked to discover suspicious circumstances surrounding his father’s death. Against his brother’s wishes, he decides to stay in Paris and uncover the truth. However, in looking for his father’s killer, Max steps into a world full of secrets, spies and assassins. In some ways, his life is put in even greater risk than it was during the war.


I was fascinated by the historical context of this novel with its details about the 1919 peace conference. There are so many twists and turns in the plot that I was suspicious of many of the characters at various points. This is a truly outstanding story that will have you guessing until the very end. I highly recommend it for fans of historical fiction.


I really enjoyed this book and will definitely be looking out for more books by Robert Goddard. The cliff hanger ending has left me desperate to know what will happen next.


I read this as part of the Transworld Historical Fiction Reading Challenge.
Posted by Sarah at 05:52