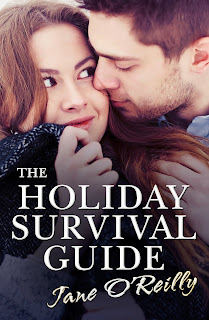 I am delighted to be taking part in the cover reveal for The Holiday Survival Guide by Jane O'Reilly.


Witty, clever, and sharp. It's going to be the holiday from hell...and that's just how Erica wants it.

When tabloid journalist Erica Parker is forced to take a holiday, she's determined to make it the most miserable holiday she possibly can, but not even her impressive imaginative powers could have come up with sharing a tent with survival expert Nathan Wilde.


Nathan was a married man with a successful TV show before Erica got to work on his life. Now the hottest man she’s ever met is single, furious, and he’s got her alone in the wilderness for three long days…

Goodreads Praise for Once A Bad Girl : “Once A Bad Girl is an amazing debut by author Jane O’Reilly. It is actually hard to believe that it is a debut novel. The interlaced humour and sensuality in this story sucked me in from the start and held me captive throughout...”

Jane O‘Reilly writes for both Escape and Carina UK. The Holiday Survival Guide is her third title with Escape.
Perfect for fans of Victoria Dahl

Jane O’Reilly started writing as an antidote to kids’ TV when her youngest child was a baby. Her first novel was set in her old school and involved a ghost and lots of death. It’s unpublished, which is probably for the best. Then she discovered contemporary romance, and that, as they say, was that. She lives near London with her husband and two children. Find her at www.janeoreilly.com, on Twitter as @janeoreilly, Facebook or email her at jane@janeoreilly.com