Review of The Poisoned Island by Lloyd Shepherd 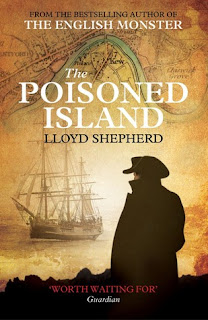 From the very beginning, the reader is swept back to the early 1800s when the British Empire was attaining its height and the discovery of exotic faraway places was coming to an end. Sir Joseph Banks, president of the Royal Society, has personally financed one last voyage to Tahiti in the Solander in order to gather the exotic flora of the island and plant it the gardens and hothouses at Kew. Is this his only reason for the voyage? He seems more interested in one particular plant – this fascination noticed by his librarian, Brown, when the cargo is unloaded at Kew.

Meanwhile, against the backdrop of the East End docks, its poverty and lawlessness, River Police Constable Charles Horton and his Chief, Magistrate John Harriott , find that they are investigating the death of Sam Ransome . Ransome has been discovered by his lady friend, killed in mysterious circumstances in his rather seedy lodgings on the very night of the docking of the Solander - lying on his bed strangled but with a huge smile fixed on his face. His sea chest has been ransacked but nothing seems to be missing - his wages are still there, intact. The captain of the Solander, Captain Hopkins, a very upright and trusted captain can see no reason for Ransome`s death, but his ship`s Chaplain, a half-caste Tahitian islander, has an air of mystery about him and is unwilling to part with any information. The gruesome murders of five more crewmen follow, each in equally exceptional circumstances, the one link between them all being a kettle , a cup and some tea leaves?
How do these deaths connect with Banks and Brown? Was this voyage just a trawl for singular plant life to further the new science of Natural Philosophy championed by the Royal Society? What did Captain Hopkins and his crew really bring back to Kew from the sacred mountain on Tahiti? This story is masterful, combining as it does history and real characters with imagined personae, intrigue and politics. For anyone who has read” The English Monster”, this is another very rewarding read. If you haven`t been introduced to Lloyd Shepherd, this is an admirable first taste!