Review of The Last Caesar by Henry Venmore-Rowland 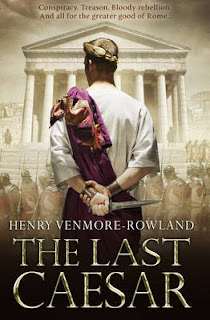 AD 68. The tyrant emperor Nero has no son and no heir.

Suddenly there's the very real possibility that Rome might become a republic once more. But the ambitions of a few are about to bring corruption, chaos and untold bloodshed to the many.

Among them is a hero of the campaign against Boudicca, Aulus Caecina Severus. Caught up in a conspiracy to overthrow Caesar's dynasty, he commits treason, raises a rebellion, faces torture and intrigue - all supposedly for the good of Rome. The boundary between the good of Rome and self preservation is far from clear, and keeping to the dangerous path he's chosen requires all Severus' skills as a cunning soldier and increasingly deft politician.

And so Severus looks back on the dark and dangerous time history knows as the Year of the Four Emperors, and the part he played - for good or ill - in plunging the mighty Roman empire into anarchy and civil war...

The Last Caesar is an impressive novel from debut author Henry Venmore-Rowland. It is set in AD68-69, which was a remarkable period of time in Roman history as in AD69 four Emperors ruled Rome. It has become known as the Year of Four Emperors.

This is the first novel set in this time period that I have read and I really enjoyed it. Venmore-Rowland’s writing is addictive to read and keeps you turning the pages to find out what will happen next.

Venmore-Rowland is certainly an author to look out for. I am looking forward to reading future work from this author.

I read this as part of the Transworld Historical Fiction Reading Challenge.